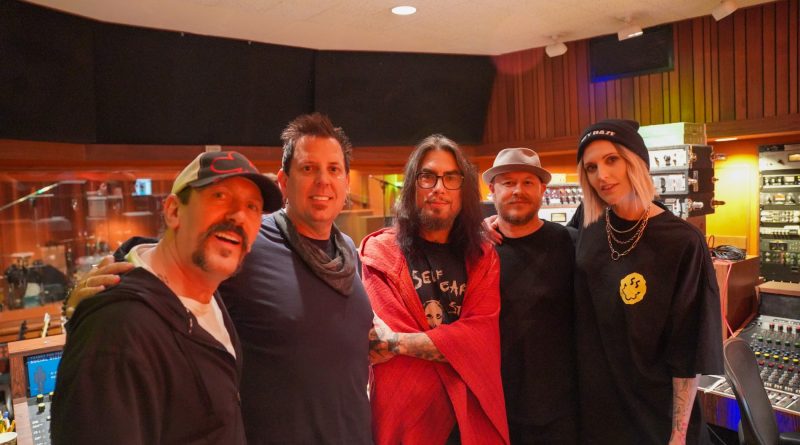 SUNRAY MAGAZINE has the big honor to interview to the wonderful Sean Dowdell businessman founder of multi-million dollar company which had never been done in the tattoo industry «Club Tattoo», and amazing drummer who created the rock band called Grey Daze with his friend, the legendary Chester Bennington of Linkin Park, today takes his time to be interviewed by us
Hi Sean thankyou so much for this interview

SUNRAY: Talk us about you
Sean: I’m currently 47 years old and lice between Phoenix, Arizona and Las Vegas. I am married to my wife and business partner Thora since 1998. We have 2 children Brennen and Carston and I love being a dad.
I am a serial entrepreneur and I love creating, opening and operating several companies.
I am an author of 2 books “Tattooed Millionaire” and “Brand Renegades”.
I love music and have been playing drums since 1991.

SUNRAY: When did you decided start a Tattoo Business?
Sean: 1994 with my bass player Mace Beyers. Through a culmination of being involved in the promoting side of music and the proximity to the music venues we decided that this was a viable business that could potentially make money ling term and supplement our touring income.

SUNRAY: When and where opened the first Club Tattoo shop?
Sean: 1995 in Tempe Arizona near Arizona State University.

SUNRAY: During all this years you and your wife opened several shops, can you mention where?
Sean: Currently we own 6 luxury studios in Arizona in Mesa, Tempe, Scottsdale and Las Vegas inside The Venetian Grand Canal Shoppes, Planet Hollywood Miracle Mile Shops and the LINQ Hotel & Casino, and are working on opening more this year.

SUNRAY: Sean you wrote your first book in 2017 titled:»TATTOOED MILLIONAIRE” (BUILDING THE CLUB TATTOO EMPIRE, talk us about it
Sean: Tattooed Millionaire was a biography about my music and entrepreneurship life. I give the back story to the success and my upbringing. There are many ups and downs and I speak about my failures more than the successes.
It was through the many failures that we found and created success. We learned the most by finding out what we did wrong and I try to pass along business lessons through these stories.

SUNRAY: Since 2007 you do public speaker and you have been teaching business seminars around the world in places such as London, Manchester, Philadelphia, Miami, Phoenix, & Las Vegas. How was that experience? Are you continuous doing it at present?
Sean: I love teaching and mentoring other entrepreneurs. I know how hard it is to start and run a business. I had a few great mentors that really gave me hope in dark times.
I feel that it is a duty to help others and give back and I find it not only gives me joy, but is truly meaningful and fulfilling.

SUNRAY: Sean you are not only a bussinessman, also an incredible drummer, founder of the rock band Grey Daze with the legendary Chester Bennington of Linkin Park, When started this adventure?
Sean: We started our band in 1992 and formed Grey Daze in 1993 together.
The band put out 2 full length records in the nineties and had 2 record deals.
We eventually broke up in 1998 and Chester went on to Linkin Park.
We reformed the band in 2016 and had started to work on new music and recording a record prior to Chester’s passing.

SUNRAY: Give us a few words which define who you are as a drummer
Sean: Wow, that’s a tough one. I do so many things and have passion for so many different things. Some of which don’t really cross pollinate.
I love music, I am a serial entrepreneur, I am a father, a husband, an author. I love to mentor young business kinds and give back to every community I am a part of.
I love the rooting for the underdog in most situations. I hate bullies and trash talkers.

SUNRAY: We would like know more about your beautiful friendship with Chester
Sean: He was a great friend and a great father. He really enjoyed spending time with his kids and I e of his biggest worries was not having enough time with his children.
He loved most people and never liked confrontation.
He would give the shirt off of his back to help strangers and always wanted to give back to the world. He was the LEAST selfish person I ever met.

SUNRAY: What is the best advice you could give to a young ambitious drummer who is looking to develop and further his career in the music sector?
Sean: Practice and learn from other great drummers and try to connect with other musicians that LOVE playing and writing. Don’t waste time on people who are half assed playing or practicing. If you are serious and want to be successful then find other like minded individuals. Don’t settle because you’re scared of losing out.
Have fun, and don’t follow what everyone else is doing, playing wise or writing style.
Do your own thing and be the best unique version of you.

SUNRAY: Talk us the new album of your band «Grey Daze»
Sean: We recorded the new album at Sunset Sound Recorders.
There are 10 tracks and we spent approx 8 months writing with our band and producer Esjay Jones.
It was a great experience and I think the fans are going to absolutely fall in love with the music.

SUNRAY: Tell us where we can find you (social network, websites…)
Sean: Twitter
@seandowdell
@therealgreydaze
Instagram: @greydazeofficial
@sean_dowdell
Facebook:
@Grey Daze
@Sean Dowdell
Sean Dowdell
Club Tattoo
SUNRAY MAGAZINE is so grateful with Mr Sean Dowdell for take his time to give us this interview! We wish him the best success!
Interview by
Maria Fernanda Capici
Editor in Chief Sunray Magazine