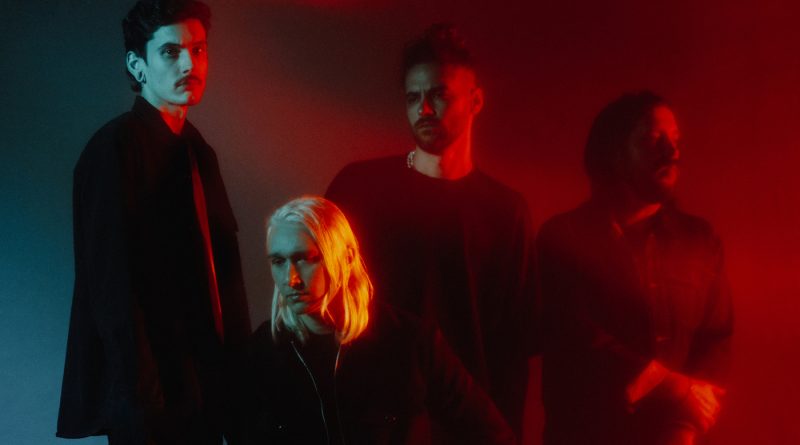 SUNRAY MAGAZINE has the pleasure to interview to Tyler Levenson from Rock Band “Afterlife“.
Hi Tyler thank you for take your time

SUNRAY: How Did You Meet?
Afterlife (Tyler): We’ve been friends for quite some time now. I (Tyler) have known our guitar player Andrew for about 15 years now, our drummer Luke for just a little under that time frame and the same with our bassist Tristan and we sort of met each other through different local music scenes.
We started “Afterlife” back in late 2017 / early 2018 and have been pushing the limit ever since then, it’s been quite an adventure.

SUNRAY: Why Afterlife?
Afterlife (Tyler): We had a LONG list of names prior to deciding on “Afterlife” and nothing ever felt right you know? We wanted a name that felt transcendent, something that would exist past the lifetime of the band and during that time we were in another band that was being put to rest so it felt like a perfect name to start fresh on and come on it sounds sick!

SUNRAY: Who Are Your Biggest Influences?
Afterlife: Personally, I am heavily influenced by Linkin Park, Slipknot, Papa Roach etc because they really set the foundation for the style of music we play and love, we also take a lot of influence from modern rap, rock and electronic music.
We are constantly trying to create something new and fresh with our music while keeping that nostalgic feeling we really care about.

SUNRAY: What’s Your Songwriting Process?
Afterlife (Tyler) : We have a unique writing process, we love to write in the moment, we love to encapsulate the emotions that we are currently feeling.
We work with the LA based producer “Zach Jones” and have since Day 1 of Afterlife and he is absolutely fantastic.
He really knows how to get the band where we need to go, writing and recording with him is flawless and such a fun time.
We normally start from scratch on a lot of songs and build them as we go and as we feel inspired, it just works best for us that way.

SUNRAY: Talk us about the new album “Part Of Me”
Afterlife (Tyler): Our new album “Part Of Me” is out now on Hopeless Records.
This is our second full length album and it’s been my favorite piece of music we have worked on so far.
I think this album has some of the most honest and emotional songs we have ever written and the process behind writing the album was a life changing process.
When we were coming up with a name for the album I really wanted something that felt more than just an “Album Title’ – I wanted something that felt personal not only to myself but to the listener as well because with these 10 songs I feel as if it’s the most honest I’ve been with my songwriting and I wanted the listener to feel as if they had a “Part Of Me” in every song.
“Part Of Me” is Anger and Frustration
“Part Of Me” is Heartbreak and Loss
“Part Of Me” is Fear and Uncertainty
“Part Of Me” is Perseverance and Desire
“Part Of Me” is Growth and Realization
All feelings I was dealing with during the creation of the album and I’m sure many others have felt during their lives.

SUNRAY: Who’s your ideal musician to collaborate with and why?
Afterlife (Tyler): I would personally love to collaborate with Mike Shinoda of Linkin Park / Fort Minor.
He is absolutely one of my favorite writers and singers and it would be a dream come true if that happened!
So Mike if you are somehow reading this let’s make some music haha!

SUNRAY: How’s The Tour Going? What’s next?
Afterlife: So as of right now we are currently not on tour but will be this summer!
We have made a few festival appearances and if that’s any indication of how our touring shows will be all we can say is we are so excited to be back on the road!

SUNRAY MAGAZINE is so grateful with Afterlife for this interview, we wish them the best wishes!
Photos By Ana Massard
Interview by Maria Fernanda Capici
Editor in Chief
SUNRAY MAGAZINE