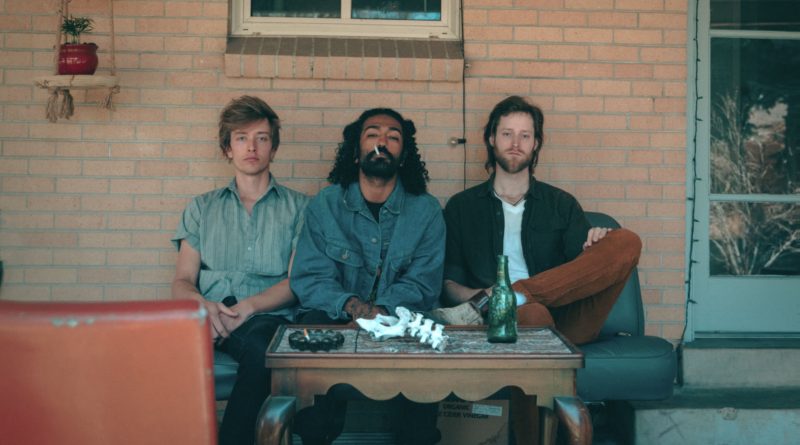 SUNRAY MAGAZINE has the pleasure to interview the band Shadow Work
Hi guys thank you for this interview.

SUNRAY: How Did You Meet?
SW: We all met in Boise, Idaho back in 2019. Rafael and Joseph first met while playing together in a previous band. That group dissolved, but Rafael and Joseph realized their musical chemistry and continued to collaborate in one-off projects. A few months later, Joseph met Ben while he was walking the streets of downtown Boise. Ben was busking on his drum kit and Joseph was impressed by his dynamic jazz-inspired rhythms. He soon invited Ben and Rafael to a jam session at his house. From the start, they created a unique sound that felt effortless. Even though they showed a lot of creative potential, Rafael had already made plans to move to Denver, CO in the fall. Despite their impending separation, they continued to create music together in the time they had left. Unknowingly, some of those jams became the foundation of their freshman EP, “Robben Island” which was released Summer 2021.

SUNRAY: Why Shadow Work?
SW: When we began to fully flesh out and record our first record, we were living in Denver in unfavorable conditions, you could say. A really tiny apartment with way too many people (turns out a living room can also double as multiple rooms). During this time, a couple members had been reading Carl Jung and were interested in the concept of Shadow Work. It was tossed around in conversation as a possible band name, but never solidified. The drastic change in living situation and stress of starting a band during Covid led to a lot of self-discovery. Building healthy relationships with bandmates proved to be one of our greatest challenges. We had to be vulnerable and acknowledge our character flaws. So when it came time to decide on a band name, Shadow Work seemed very fitting.

SUNRAY: Who Are Your Biggest Influences?
SW: Influences are always a tough question for us. It’s an array of artists such as Victor Wooten, Thundercat, Steve Wonder, Radiohead, Crumb, A Tribe called Quest – a little all over the place, honestly. If anything, it’s more of what we are listening to that week. Since we are all roommates, there’s no shortage of musical creativity in the house. We view the eclectic nature of our musical influences as a real strength.

SUNRAY: What’s Your Songwriting Process?
SW: Our song writing process comes in different forms. Some days Joseph will come with an idea that we jam and build into different musical themes. After working it out for a time, we try to compose the ideas into a song structure. Other times Rafael will come with a riff and vocal melody, upon which Joseph and Ben will build a rhythm section around. Ben will also come to the table with a rhythm and Rafael and Joseph add their ideas. Throughout the process, musical ideas are ever-changing. Ideas initially brought to the table tend to sound much different by the end.

SUNRAY: Who Do You Sound Like?
SW: At the end of the day, we strive to be true to ourselves and the music we create. We never go into it with the intention of sounding like someone else, but we are always flattered with the comparisons we get because the bands we’re compared to are truly legendary: bands such as Radiohead, Pink Floyd and Yellow Days to name a few.

SUNRAY: Who would you most like to collaborate with?
SW: It’s amazing to be in such a great music community here in Denver. The artists we want to collaborate with are right in our back yard. Artists such as Ramakhandra, The Crooked Rugs, Los Toms, The Sum Beaches (who we recently just went on a tour with this past May), The Velveteers (who just did an amazing record with Dan Auerbach), Dry Ice (who are another great Denver band making strides for the community). There are too many bands doing great things to list them all!

SUNRAY: Please talk us about the new Single
SW: So our latest single “Fox In The Coop” was just released May 19th and we couldn’t be more excited. We’re celebrating the release with a tour through the south east portion of the United States. Sonically, the single is a journey for the listener: it’s filled with dark, washy guitar textures, intricate bass riffs and dynamic jazz-inspired rhythms. We hope it scratches an itch you didn’t even know existed. It’s available for purchase through BandCamp, ITunes and Google Play and can be streamed on all major streaming platforms.

SUNRAY: How’s The Tour Going?
SW: We are stoked to be heading on the road in the next couple weeks. This will be our first time touring this part of the country and we couldn’t be more excited. Between all the commotion and planning it takes to make something like this happen, we just can’t wait for the fun part. Getting to play music for lovely new people while making once-in-a-lifetime memories is something we live for. We plan on doing another tour down south in the fall, so we believe this is the beginning to something beautiful.

SUNRAY: What next for you?
SW: So right now the big thing for us is the tour coming up at the end of this month. After that, we have a few releases planned for the summer, a couple new runs of merch, and a few more tours to new places in and out of state. With so much happening, it’s best to keep up with us on Instagram, Facebook and our Linktree.

SUNRAY: Tell us where we can find you!
SW: The best places to find us are Instagram, Facebook, Tiktok, Twitter and all major streaming platforms. I’ll make sure to leave the links below and hope to see y’all’s lovely faces at a show near you!
Further information:
Instagram:
http://www.instagram.com/shadow_work_official/
Facebook:
https://www.facebook.com/shadowworkOfficial
Spotify:
https://open.spotify.com/artist/7CTtlHnsQi0YdGsm5d5VUP?si=PtrxLGjVTeS2Kt9-WTOpsQ&utm_source=copy-link&dl_branch=1
Apple Music:
https://music.apple.com/us/artist/shadow-work/1565535757
Linktree:
https://linktr.ee/shadowworkofficial