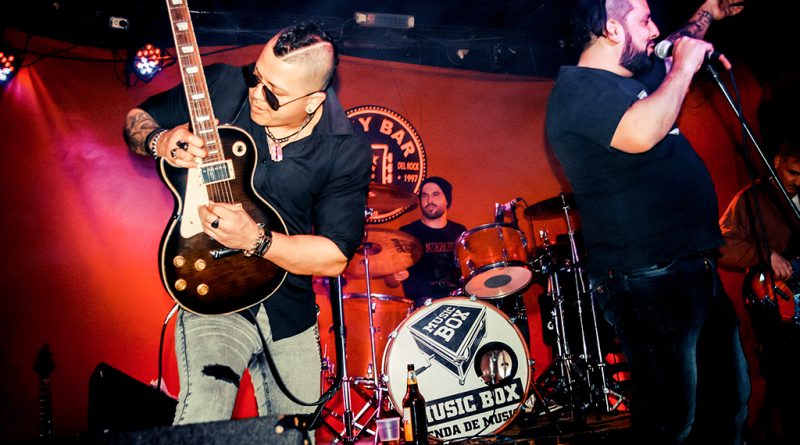 SUNRAY MAGAZINE has the pleasure to interview the Rock Band “LeviatanRock“. Language

Leviatan: The band is made up of 5 people. Matias on drums, Tadeo on bass, Juan and Carlos on guitars and Nicolás on vocals.

SUNRAY: How Did You Meet?

Nico, I have known Juan and Matías for more than 6 years… I met Matías through a search page for musicians and then Matías brought Juan. Tadeo is a colleague of mine and we contacted Carlos through a Facebook page dedicated to searching for musicians…

Carlos, I subscribed to a facebook page where musicians are published looking for bands and vice versa, by chance I saw Leviatán’s post, they were looking for a guitarist, I checked their YouTube channel and social networks, I liked their music, it was what I was looking for a time, so I decided to write to Nico.

Mati, I met Nico through my first band ¨Cultura Rock¨ in 2016. I knew Juan from the Coghlan neighborhood, he had a band that we were going to see called Delicious Addiction and one day I called him to join our band, at that time it was called ¨Caracol en Moto¨. I met Carlos and Tadeo now, when they joined Leviatán in the current studio in Don Torcuato.

Juan, I have known Mati Rolla from the neighborhood for more than 15 years, we had not been seeing each other at that time but he invited me to play with the first formation of what later became Leviatan and I was part of the process until where we are

Tadeo, I met Nico at work and he told me about the Leviatan project, the history of the group, the songs and we started with the rehearsals in which from the beginning there was great chemistry between everyone and that was very important.

Because it is a Rocker name, it was proposed and stayed on the touch. We were looking hard for a name and nothing came up, and Matias said “LEVIATAN”. Hey! We said, it sounds strong.

I knew the name had something to do with the bible, but not much more than that. Then I began to study the meaning well and it turns out that Leviathan is a sea monster (in the bible) that represents the devil. It goes without saying that we have nothing to do with that story, we liked the name.

Nothing to do with satanism, or sects, or demonic letters, or absolutely anything like that, it’s simply a name with “POWER”!

SUNRAY: Who Are Your Biggest Influences?

Nico, Many bands the truth, the band of my adolescence was La Renga. The first rock band I saw! My wig blew up, also Los redondos, Pappo y Las pelotas…

Carlos, Then over time I have lowered the distortion a bit and I think I have focused more on bands with predominant guitarists like Slash, Zakk Wyldes, ACDC, Avenged Sevenfold and many others that I may forget at this moment…. This is almost infinite…

Mati, If we talk about bands that have influenced me I can name Zeppelin, Sabath, Guns and Roses, Kiss, Pearl Jam, Red hot…

Tadeo, The biggest influences of the group are La Renga, Patricio Rey, Pappo to name a few.

Nico, I usually start by writing a kind of story and then I look for a rhythmic base on the guitar to accompany what I write. Then it is put together and developed together with the rest of the band where we all finish polishing it until we get to the song itself.

Is a very cool mix between different musical styles. On the one hand, we have Hard Rock, Blues and ballads, which make it a band where you can find this very attractive mix. We could make an infinite list of rock bands and each one has its own style, although if we can define the gender we do as “Hardrock”…

SUNRAY: Who’s your ideal musician to collaborate with and why?

Nico, I have several favorite musicians to call them in some way, Argentine national rock touches me very closely.

Carlos, I would really like to do it with any artist who wants to make good music…

Mati, My ideal musicians to collaborate with are the band I have: Leviatán.

Juan, Of the great national artists I would love a collaboration with Mollo and Chizzo

SUNRAY: The Rock lovers are suffering from the “new reggaeton musical movement”, how do you keep  Rock &Roll alive?

We don’t think reggaeton is something new at this point. We don’t listen to Reggaeton and honestly its existence doesn’t hurt us, it’s a type of music that we don’t like, but nothing more.

Rock and Roll (like everything) is in a process of change thanks to technological innovations, today we live in a world where many bands are listened to on YouTube or Spotify where the important thing is to achieve the diffusion of the music or the artist.

There are still a lot of people wanting to rock and with respect to the reggaeton genre, each one chooses which music to play the deaf (lol, laughter)… Rock will live on as long as there are musicians who like to rock

SUNRAY: What next for the band?

What’s next for the band is to get into the studio and be able to record our next album which is already in the works. We have new many projects, now we are playing quite often and we want to stay active on stage. We want take our music to every corner where we are received.

Time will answer you!…

SUNRAY: Please tell us where we can find you (Social Networks, website…)