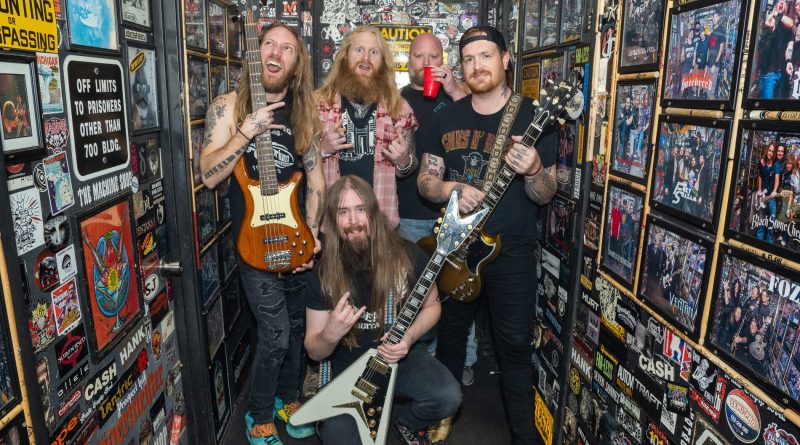 SUNRAY: How Did You Meet?
MJ: Matt James (Singer Blacktop Mojo): Nathan Gillis (Our Drummer) and I met after I graduated from college through some mutual friends. We had a few member changes here and there, but we met all the guys in the current line up through touring and running into each other in different places.

SUNRAY: What Does Your Band Name Mean?
MJ: We all grew up in the middle of nowhere so a lot of the time the only things there were to do were to drink and run around on backroads & stuff. We’d get a bottle of whiskey and go down a road where nobody goes, then just drive real slow, listen to the radio and hang out with our buddies. One time I was waiting for Nate to get off work – we were going to hang out and jam or something – when some of his buddies showed up with a big bottle of Jim Beam and said, “Hey, you wanna go back-roadin’ with us?!?” And I thought they were cool, but I hadn’t gotten to hang out with them much, so I said, “Hell yeah!”. We go out back-roadin’, I’m hangin’ out with these guys and I need something to stir my drink; one of them is a duck hunter and he hands me part of a Mojo brand duck decoy to stir my drink. Me and Nate had been jamming for a couple months at that point and we had been trying to come up with a name for the band without any luck, but when we got back from that trip even though the details were a little fuzzy we came out of it with Blacktop Mojo.

SUNRAY: Who Are Your Biggest Influences?
MJ: I grew up on a lot of classic rock: Van Halen, AC/DC, etc, but I always just sort of listened to what my parents listened to, other than a few CDs I bought myself. I can’t remember every one of them, but Linkin Park’s ‘Hybrid Theory,’ The Offspring’s ‘Splinter’ album, some pop/punk stuff of the day like Good Charlotte, Simple Plan, Sum 41, and Blink 182, and a ‘03 or ‘04 Vans Warped Tour compilation album were some that I can recall melting in my Discman. Later in life I found a little more of some of the stuff that I think definitely finds its way into our music like Led Zeppelin, Waylon Jennings, Black Sabbath, Sound Garden, Tool, Stevie Ray Vaughn, Lynyrd Skynyrd, Prince, Alice In Chains, and so many more.

SUNRAY: What’s Your Songwriting Process?
MJ: Most of the time, we all get in a room together and sort of trade ideas and jam until something cool comes out. It’s a very collaborative process.

SUNRAY: Who’s your ideal musician to collaborate with and why?
MJ: Ayron Jones. He’s an insanely talented guitar player and I dig his style a lot. Somebody like Post Malone or Jelly Roll would be cool. They seem to be into a lot of different genres and would be fun to cook something up with. I’m a huge Leon Bridges fan,his soul is absolutely unmatched. It would be a massive honor to collaborate with him as well.

SUNRAY: What is your favourite song to perform?
MJ: The next one.

SUNRAY: Talk to us about your recent performance on Welcome to Rockville, How was that experience?
MJ: Rockville was awesome for us! We got to perform before the weather got really bad and had a rowdy and loud bunch of people that got down with us.

SUNRAY: How’s The Tour Going?
MJ: Touring is going great! We are off at the current moment. I had my first child a couple months ago and our drummer had his first last week, so we’re taking some time off to spend with our families.

SUNRAY: What next for The band?
MJ: We’ll be headed back out on tour July 15th! We’re headed to the West Coast for the first time since before the pandemic, and then we have some more dates coming up this fall around the festival dates we have!

SUNRAY: Where we can find you?
MJ: You can find everything at www.blacktopmojo.com, and @blacktopmojo on all the social media sites!