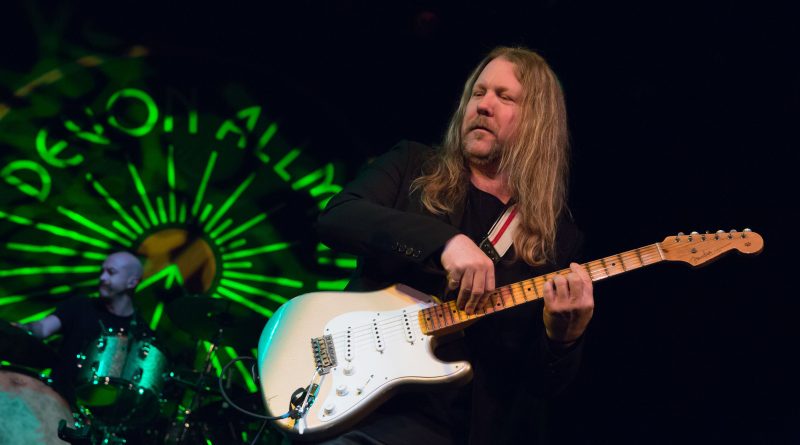 THE DEVON ALLMAN PROJECT, THE SAMANTHA FISH BAND, & special guests The RIver Kittens– (3/12/22)
The Devon Allman Project rocked the Palladium in Times Sq. The Samantha Fish Band was exceptional at their craft. The River Kittens energized audiences.
In the essence of the Allman Family Revival concerts, The Devon Allman Project and the
Samantha Fish Band collaborate on a co-headline tour featuring the River Kittens as the opening act. The Devon Allman Project has previously toured almost 20 countries. Playing the Peach Festival, Gov’t Mule’s Island Exodus, Joe Bonamassa’s Keepin’ the Blues Alive Cruise and festivals throughout Europe and the USA.
St. Louis Missouri based duo The River Kittens announced that they would be joining the tour back in October of 2021. These self-proclaimed hell raisers went on at 8PM and are known for their harmony vocals and the tight exchange of mandolin and guitar. They uphold a banner of blue collar America, fitting for the modern era. They nailed this sentiment in their song “Dressing on the Side”. The incredibly versatile pair have released their debut Extended Play titled “Soaking Wet” earlier this year. The EP was recorded via Devon Allman’s Create Records, at the storied Sun Studios in Memphis Tennessee.
Co-headliner Samantha Fish is reported as one of the most exciting and inventive artists. Guitar World Magazine placed Fish in their ‘Top 10 Best Blues Guitarists in the World’ list. She is a singer, songwriter, and guitarist. Has seven albums under her belt, the most recent being dubbed Faster, produced by Martin Kierszenbaum (Lady Gaga, Sting.)
This is her sophomore release for Rounder Records, her debut, was 2019’s Kill or Be Kind.
Exposing her affection for blues heroes like R.L. Burnside as well as wildly inventive artists like Prince.
“The whole record has a theme of taking charge and taking the reins, in a relationship or life in general,” says Fish. “I thought that after 2020 I’d end up with a dismal, bleak album, but instead, we came up with something fun and sexy and so empowering.” For Fish, her greatest joy about making music is the robust exchange of energy at her incendiary live shows. Fish experienced a similar exhilaration during the process of creating Faster.— The live performance was an explosive brand of blues/rock-and-roll. Samantha Fish will be touring the United States until October 2022, then she makes landfall in the UK before tour dates in various European countries.
The show also featured a liquid light show, in the backdrop, courtesy of “Brotherhood of Light” a visuals company who has toured with the Allman Brothers for 20 years. These visuals played with the mind as the ambience crept up, like smoke rising to a ceiling. The fluid play of Blues music award winning guitarist Devon Allman, in conjunction with the vapor like visuals, was an explosion of the senses.
DAP was formed in 2017, and has been touring since 2018, is quite the spectacle. The team of Allman and Duane Betts display true mastery, obtained by a lifetime of touring, hardwork and love for the music. The Devon Allman project will be touring throughout the Eastern United States for the next few months.