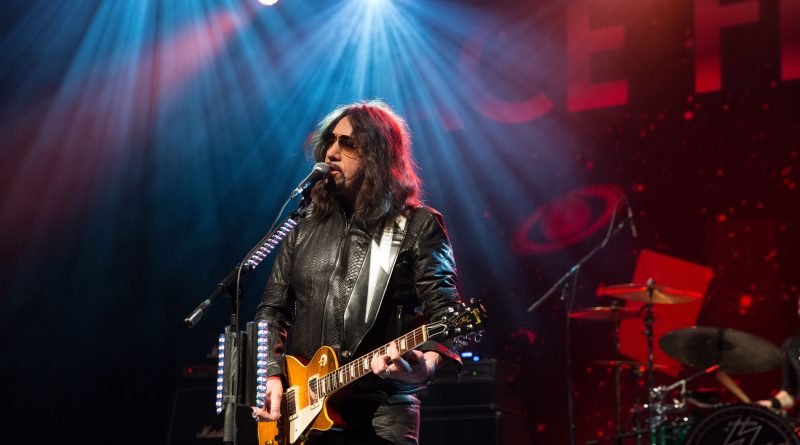 The Spaceman returned again to Long Island!
This time visiting the illustrious Patchogue Theater.
Ace Frehley provided those in attendance, a solid mixture of Kiss classics, along with solo work that spans decades. The musical set also included solos that were simply amazing and anthemic covers that proved the Bronx native can easily be considered a masterful guitarist.
Energetic four-piece Tokyo Motor Fist opened the show for the Rock Persona Their optimistic-sound encouraged the crowd’s enthusiasm for a good time. Guitarist Steve Brown (Trixter), bassist Greg Smith (Ted Nugent, Alice Cooper), and frontman Ted Poley (Danger Danger) cumulatively ran a mile during their set. Witnessing the band members (that weren’t hindered by instruments) running back and forth across the stage, brought a noticeable smile to my face. The alliance between Poley and Brown so far yielded two albums. A Self-Titled in 2017 and Lions (2020) Both of which contain power-ballad as well as roadtrip rock. They embody youthful energy but with the blue-collar craftsmanship that comes only with experience.
One could close one’s eyes and most certainly sense the 80’s were spiritually there in attendance. TMF inspired and required crowd participation, and I for one was happy to oblige.
The extensiveness of Poley’s Rock n Roll career was shown, when the band started playing Monkey Business by Danger Danger. Due to this being a loved hit back in the early 90’s, the audience promptly sang along.
Picking up the Pieces is like your own little cheerleading section. That even though tough times are in the cards for most people, it doesn’t mean we can’t forge ahead after things break-down.
The next show on tour with Ace, is on March 5th at The Chance located in Poughkeepsie NY.
Any other information can be found on the band’s Facebook page.

To the repeated chanting of Ace, Ace, Ace, the Living Rock-Legend appeared on stage. He proceeded to give the crowd what they were requesting. Opening with Rip It Out, Parasite, and Strutter, some classics that had everyone moving. The lighting of the theater coupled with the music, produced an ambience I was fortunate enough to witness.
Ace’s most recent work, Origins Vol 2 (2020) has a track listing of all covered songs. The Spaceman recruited the likes of Lita Ford, John 5, and Robin Zander, all in order to create a truly impressive effort. The break out of the initial riff of Good Times Bad Times gripped me personally, because I wasn’t expecting it. The band provided all of us in the audience
quintessential rock n roll, peppered with surprises.

The set list that was performed had a real amount of power to it, and Ace being Ace, let his feelings be known, about the wartime situation in Ukraine. “F*** Putin!” was growled into the microphone, prior to the start of Rocket Ride from the Alive II album. As a Rock n Roll enthusiast, I have to appreciate the audacity of the man willing to throw caution to the wind, especially in this day and age. Each song played had an aspect or modus operandi that kept these eyes of mine glued to the stage.
One visible feature is that it is almost impossible to leave without a guitar pick from the band (for those after a complimentary keepsake). After the first song that was made abundantly clear.
Also made abundantly clear was The Spaceman’s New York roots, something that he takes pride in. Tearing into Hard Times with its inherent Blues nature, has one almost pining for the grit and grime of the song’s inspiration. The bubbling into New York Groove was an absolute highlight of the show. A tune most of the crowd was expecting, but was dangled above head like candy from a baby. A personal favorite of many New Yorkers, could not have been performed more authentically by any other.
Ace’s guitar work was an outright highlight of the show. A six minute solo consisting of a medley, had Ace certainly showing off for the audience. Guitar riffs from famous tracks were flowing into each other with a genius not possessed by many. When Deuce was played it was an absolute jaw-dropper. The perfect end to a showcase of utter talent, and devotion to their craft. Ace Frehley is touring across the country from March to June 2022, more information can be found on his website at acefrehley.com. www.instagram.com/acefrehleyofficial/