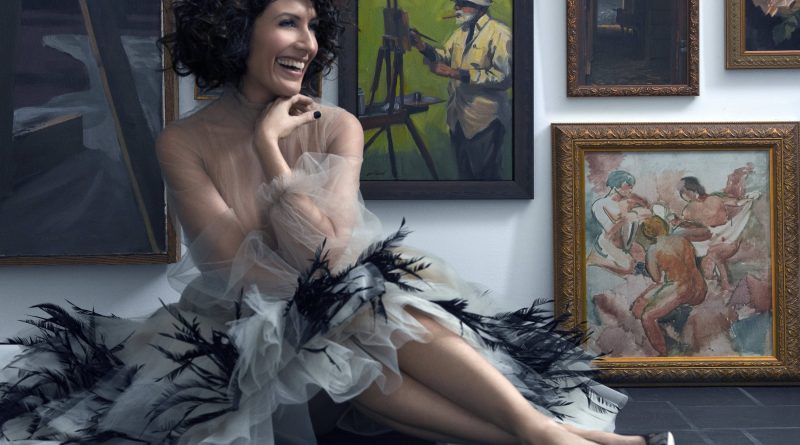 SUNRAY MAGAZINE has the big honor to interview the marvellous Hollywood`s actress Lisa Edelstein. Know for her role as «Dr. Lisa Cuddy on the hit Fox series “House”.
She co-starred for seven seasons on the medical drama, which became the most watched show in the world and garnered Edelstein the People’s Choice Award for Favorite TV Actress.
Ms Edelstein an Actress with a huge career, today takes her time to be interviewed for us.
Hello Ms Lisa thankyou so much for this interview

SUNRAY: Could you talk to us a bit about yourself besides being an actress?
Edelstein: Well, I live in a beautiful historical home with my remarkably talented artist husband, our two teenage boys, and dogs dogs dogs. I am the type of person that needs to constantly be creative or my brain starts to eat itself. So, when I’m not working as an actress I’m either drawing and painting or writing. The older I get, the more I understand that about myself. I’m so grateful for the outlets I have access to!

SUNRAY: When did you decided that you want to become an actress?
Edelstein: As soon as I had words to use I told my parents I’d become an actress. They hoped I’d grow out of it and become a lawyer, but clearly they didn’t realize how determined I was! We didn’t really have access to this industry, so it seemed like a dangerous dream to have; they just wanted me to be safe and secure. But I had a driving passion to be in the arts. It’s true that it is a tough life some times, but when it’s good it’s better than anything I could wish for in the world. I am living my dreams!
SUNRAY: Did you take up any training in acting?
Edelstein: I went to NYU and studied in the experimental theater program. It was fun and interesting, but what I really wanted to do was get out into the world and learn on my feet.

SUNRAY: How did you get involved in Acting?
Edelstein: I was in every play and every dance performance within a 50 mile radius of my hometown. When I was 15, I studied the map of NYC and block by block wrote down every address of every agency and management company registered with SAG that I could find. Mostly, I knocked on a lot of doors and met a lot of creepy people. My story took a weird turn. In my late teens, I made a new friend, a kid my age, who started taking me out to all the coolest clubs in downtown NYC. There was a subculture there, a microcosm that was cool and weird and filled with incredible artists and musicians and designers and performers. It was a rich tapestry of everything I felt my life at that point had been lacking. It was so exciting and entrancing and overwhelming it was like finally landing in my own life. I loved it so much, that I ended up becoming famous for no particular reason in that world, to the point where The New York Times Magazine did an article about it called ‘Lisa In Wonderland.’ And suddenly I was a public figure – with nothing to back it up. Fame like that came with a lot of stalkers and not a small amount of resentment from those who were perhaps more worthy of the attention. At the same time, I knew it was an incredibly unique life experience and painful as it was, it would bring me something good. This was the mid-80’s, and we were all being besieged by the AIDS crisis. There were multiple memorial services a week. But while we were living in the middle of the crisis, the rest of the world seemed to be ignoring what was happening. People I knew from my hometown thought it was fake news, an exaggeration. President Reagan hadn’t even said the word AIDS. Friends would show up one night with a sore on their arms and be in the ICU a few weeks later and gone a few weeks after that. It was wild, terrifying. I wrote a musical about the experience, mostly about how denial kills – either from not protecting oneself or by ignoring the deaths of people you’ve discarded as Others. So, in the midst of this pandemic, my strange celebrity made it possible to get my play produced at an incredible theater in NYC called La Mama. Using creativity as a means to both cope with the insanity of the times and have a voice of protest, I would say that was when my career as an actor and a creative person truly began.

SUNRAY: What was your first role?
Edelstein: My first paying job as an actor was 3 lines on a soap opera called “Ryan’s Hope.” The night before my first day of shooting the costume designer told me I’d be perfect if I’d just lose 30 pounds. I was so upset that I had 102 fever the next day at work so I definitely wasn’t at my best!

SUNRAY: Can you tell us how was the experience to be the co-starred on the medical drama “House,” as Dr. Lisa Cuddy?
Edelstein: It’s such a blessing to be on a smartly written show opposite talented people. I was thrilled to get that job and loved it start to finish. Plus… the clothes! I got to wear the best clothes.

SUNRAY: You are also a director, can you share with us how do you feel being a director? How was the transition for you from being an actress to a director?
Edelstein: The first thing I realized when prepping an episode to direct on “Girlfriends’ Guide to Divorce” was that I actually knew much more than I thought I did. I had answers to all the questions I was asked. I was prepared and ready. Thirty years on sets is a good training ground! It was great to work with actors I loved and knowing their strengths, get them to shine. It’s fun to discover the visual aspect of story telling.

SUNRAY: The great serie “Girlfriends’ Guide” gave you the opportunity to be the series lead playing everything from heartfelt drama to physical comedy, you also had the chance to expand creatively by being a writer, producer and director on the show. Please talk us about that experience
Edelstein: It was truly a dream job! Intense work, just like I like it, and the kind of work that allowed me to use all the parts of my brain. How satisfying! We had such a wonderful crew, too, the atmosphere at work was warm and happy. I have to say I was aware every single second of that job what a special and remarkable experience I was being given. I knew it was my opportunity to expand creatively and I had the kind of boss that believed in me enough to let me. And again – the clothes!!! I got to wear the most beautiful things.

SUNRAY: Currently you stars in Season 3 of the Golden Globe, Critics Choice, and AFI Award-winning Netflix series “The Kominsky Method,” starring Michael Douglas and created by Chuck Lorre. Talk us about your role as «Phoebe»
Edelstein: I love ‘Phoebe’ because she is an absolute disaster. Privileged, but lost, perhaps with anti-social personality traits, an addict, self-serving, self-centered – she’s horrible! What a wonderful part! I had a blast.

SUNRAY: How is work with the Legendary Actor Michael Douglas?
Edelstein: He’s so warm and kind, a real mensch. Welcomed me like family from day one. He’s played so many terrible men in movies, I really didn’t know I’d like him so much!

SUNRAY: What techniques do you use to create a believable character?
Edelstein: You have to find a way to relate to them. Even if they’re horrible, you have to find the logic that makes their behavior make sense. If you can do that, then you can come from an honest place, even while behaving in repulsive ways or just making choices that you as yourself would never make. Everyone has an inner logic. Everyone’s truth is real to them. So it’s a bit like inner world building; once you’ve given yourself the structure of that character’s belief system, you can inhabit it with your own humanity.

SUNRAY: Which is your best role so far?
Edelstein: I’ve never been able to answer that question because so many roles that I’ve had were deeply meaningful to me at the time. Playing ‘Karen’ on “Seinfeld” changed my life, it was the biggest show around and the part was so perfect for my sense of humor, it was like a magic trick getting that chance. Playing ‘Rhonda’ on “Relativity” was radical because she was an out lesbian who actually dated and I had the first lesbian make out scene on network television. So that role satisfied my voice of protest once again. Same as playing ‘Cindy’ the trans woman on “Ally McBeal.” Today it wouldn’t be appropriate for a woman to play a trans woman, but back then, it was the only way to tell the story and I was proud to do it with dignity. Playing an intelligent, self-loving sex worker on “The West Wing” – how incredible. The list goes on and on. Certainly playing ‘Cuddy’ on “House” was an experience few get to have. That show was massive, it was everywhere, and it still seems to carry a great deal of weight. But playing ‘Abby McCarthy’ on “Girlfriends’ Guide to Divorce” – that was the most fulfilling on every level. I just wish it lasted longer and was on a wider viewed platform. It continues to live via Netflix, I’m still getting fan mail from people who have binged it for the first time and it makes me soooooo happy. Getting the role of ‘Phoebe’ after that was such a change of pace and with such a great group of people, it was like a palate cleanse.

SUNRAY: What is the best advice you could give to a young ambitious actress or actor who is looking to develop and further his career in this sector?

Edelstein: There is no path to success in this world. Discover yourself. Do things you love. Create all the time. Find other people that create and create with them. That is all there is! It’s an impossible, miraculous way to make a living and there is no reason why you can’t be a part of that, too!

SUNRAY MAGAZINE is so grateful with the fantastic Hollywood`s actress Lisa Edelstein for give us this interview and be our cover, we wish her more success to comes.

Special Thanks to Mr