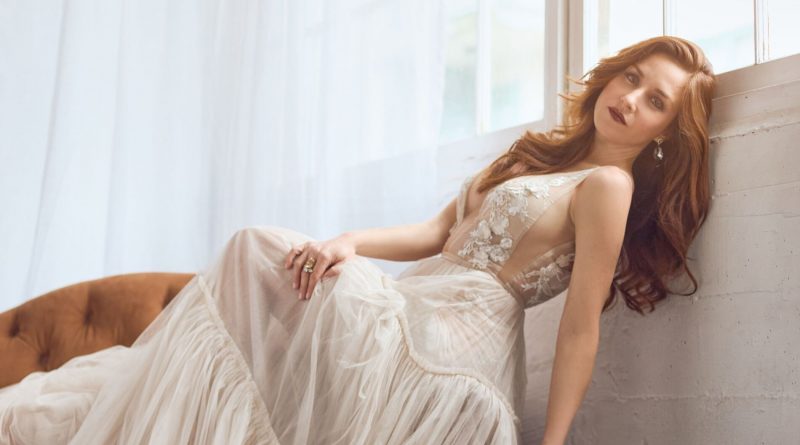 SUNRAY MAGAZINE has the honor to interview the gorgeous Canadian actress Erin Karpluk.
Hi Erin thanks for this interview

SUNRAY: Talk us about you
Erin: I’m a mountain girl at heart, I was super lucky to grow up in Jasper National Park & still visit often. I love nature since COVID I walk every day wherever I am. Be by the water, in the trees, on the beach, I need my fresh air fix and whatever podcast or book I’m listening to. It’s my mental and physical must. I love my family, friends, and career. I get overwhelmed thinking about what we are doing to the environment. I love to laugh & travel & play crib. I don’t drink alcohol and thrive in all the benefits of it. I’ve watched “Legends of the Fall” probably 30 times. My summer album is King’s of Leon “When You See Yourself”. I’m currently reading “Seat of the Soul” by Gary Zukav. I make a mean salad & overnight oats #bacheloretteliving. I live in LA & Vancouver but work mostly in Toronto so keeps me on my toes. My Hollywood crush is Jason Bateman & Oprah (30 years and counting). I’d love to act opposite Anthony Hopkins. I have two rescue cats that I miss like crazy right now. I’m a big fan of the afternoon power nap. I practice meditation daily but my goal to drink more water has never been achieved. I’m a very happy work in progress.

SUNRAY: When did you decided that you want to become an actress?
Erin: I think I always wanted to be an actress, even as a little girl. Huge into make-believe and telling stories and playing dress-up. Standard kid stuff but never grew out of it! I loved television, I was obsessed with “Threes Company” then later “Twin Peaks” and the movie “Speed”. I remember my best friend Jody & I were at the ski hill in Jr. High and she asked what do you want to be? It’s the first time I said actor out loud, then said “doesn’t everyone want to be though”? And she was like “Hell Nah! I want to be an occupational therapist” haha. And thankfully we both got our dream job.

SUNRAY: Did you take up any training in acting?
Erin: When applying for universities I think I was mistakenly accepted into the Theatre Program at UVIC. I expressed an interest in acting on my application and voila I was headed to get a BFA without a day of acting under my belt. I remember being terrified my first day, everyone was the star of their high school drama program and I didn’t know what a monologue was. Somehow I faked my way enough to make it through every year’s auditions and came out with a degree. I’m grateful for the theatre background training, which gave insight into all departments: lighting, costume, stage management, sound, so I have more appreciation for other departments. Although I almost flunked lighting as I dropped a huge light from the catwalks – no one was hurt! After university, I continued my studies in a more film and television-based medium, at different schools, and with several different teachers, from Vancouver to LA, to Toronto. I have a few teachers that I use for specific skills and characters, but I like trying different teachers as you can always learn something new from everyone. I did a year of zoom classes over the pandemic with my favorite teacher David Rotenburg to keep me sane and my artist muscles flexing. It’s like riding a bike … but it can get rusty, and you have to maintain it, and keep pushing yourself to get better or at least stay in shape.

SUNRAY: What is the first thing you do to research and approach a role?
Erin: It depends. For some projects, I do very little research if they fall in my wheelhouse. I sometimes find it’s best to prep less and trust I’ll be present on the day & bits of magic and surprise will happen. Not to say I don’t have my lines and objectives and all the basic prep done, it just means the character already lives in me. Other roles I have to really work at. I did one character in the Netflix series “Slasher” (Season 1) and I was terrified to play her. The show creator Aaron Martin (who I work closely with on “Being Erica”) wrote the part with me in mind. I felt honored but also a huge responsibility, I did not want to let him down & wanted to do the character justice. I’ve never immersed myself like that. My mentor David Rotenburg really helped me peel back all of her layers and set me up with an actor’s belt of tools to play her. I am the farthest thing from a “Method actor” but I was on this project. It was really challenging and fulfilling. Every job is different and requires a different approach, it’s usually instinctual but if it’s not I prep the crap out of it. Then when we shoot I’m able to go in 360 degrees & find it.

SUNRAY: In how many films you have performed up till now?
Erin: Ummmmm let me check IMDB. It’ says I have 81 credits … just over 30 of them are movies. The rest would be television. Crazy to look back on all the years and all the projects – I feel very lucky. Some projects changed my life, some were terrible movies but fun to shoot, some propelled my career, some were acting opposite big star names, some were filmed across seas, some I made friends for life on – our industry is so fun! Again, feel very grateful. I honestly think every day I work, even after 20 + years, even if it’s a not-so-great-show, it still feels like Christmas morning. I love it, and as the saying goes “if you love what you do you never work a day in your life”.

SUNRAY: How different is it to act in a movie and to act in Television?
Erin: I think the big factor is a movie has a beginning, middle, and end. You know the arc, the characters journey, and when you will be finished shooting. In television, you can be part of a show for years, you usually never know where your characters journey is heading, it’s a long fun steady ride. For every hour of television produced it usually takes 6-9 days to shoot, usually 12hr days (give or take). There is such an investment of time and everyone is bringing their A-game from catering to boom operator, to costumes, to directors … you really become family. It’s one of the best parts of tv. I have met the most insanely talented and compelling people on sets from all departments. When you find that groove with people you often end up working again together down the road.

SUNRAY: You are very known for your roll of Erica Strange on the CBC Television series Being Erica from 2009 to 2011. How was that experience?
Erin: That was one of the life-changing shows for sure. I learned so much about myself personally and professionally over the 4 seasons/ 5 years of filming. It’s not often a show is built around the complete transformation of one character. Erica starts off rock bottom in life, and as the seasons progress, you see her grow and thrive with many hard lessons and pitfalls. The show was designed to be a drama, but no one told me and the director Holly Dale, we both thought it was a comedy! The result produced a kind of magical hybrid of Erica’s journey. As an actor I was able to flex all my artistry and play every spectrum of the rainbow, it is rare to get this opportunity. I will be forever grateful for the people involved in making it, the friends I made, and the city of Toronto which played a huge part.

SUNRAY: What techniques do you use to create a believable character?
Erin: I always rely on instinct first, while it’s essential, I need the assistance of certain tools to flesh out different characters. Much like using different brushes to create a painting. When I first studied with David Rotenburg in 2003, I was thrilled to discover he had terms & concepts that defined and made tangible where I would naturally gravitate. Deciding your characters class, relationship to others, secrets they hold, how to swing in the scene, what the drone note is, what the character believes will happen to them when they die. It’s pretty dense terminology and he finally (yayyyy) came out with a book called “ACT” that every actor should get. I have a different ’scent’ for every character I play. If I smell the perfume “The One” to this day it takes me back to playing Erica. I pick a song for each character that acts as a backdrop for their essence. Appearance is also important, what kind of shoes does she wear, is she confident in her body, how does she present herself in the world. I could go on and on, it’s so special and fun creating characters.

SUNRAY: What has been your biggest achievement in the field of acting?
Erin: “Being Erica” for sure. I like storytelling because it inspires us, teaches us, entertains us, challenges us, and sometimes just provides a needed escape. I am blown away, even 10 years later at how this show resonated with men and women from all different ages, races, religions, from all over the world in 180 countries. The fact that I was part of creating a character that actually changed lives is my life’s purpose complete! But there is so much more to come, I’m always excited to see what’s coming up next, I’m excited about the roles I will play in my 80’s!

SUNRAY: What is the best advice you could give to a young ambitious actress or actor who is looking to develop and further his career in this sector?
Erin: Don’t have a backup plan. If you have a backup plan it’s not for you. Be prepared to be rejected and fail, A LOT. If you are doing it for fame or glamor it is not at all what you think it will be. Get as much training from different teachers, read books on acting, plays, listen to podcasts from your favorite actors and directors. Be wary of “get discovered quick” acting workshop scams – I’d say 100% of these are BS. Do the work. Immerse yourself. Find a mentor in the industry. Discover and create who you are as an artist and trust that, be that, don’t give your power up but also let go of resistance and be willing to collaborate and try new things. Don’t ever rely on anyone for your success but you. Build a good team that believes in you and are good people. Be respectful on set & with those you work with. Remember it’s a marathon, not a sprint and there are lots of ups and downs. Be smart with your money. My top books are Larry Moss “The Intent to Live”, Ivanna Chubbuck “The Power of the Actor”, and David Rotenberg’s “ACT”.

SUNRAY: Are you working on any current projects?
Erin: 2021 has been crazy busy! Whoot! I am currently filming a recurring role on ABC’s “A Million Little Things” in Vancouver, I just wrapped filming Seasons 3, 4, & 5 (!!!) of Hulu’s “Holly Hobbie” in Toronto, I also just completed an intense episode of “Two Sentence Horror Story” and guest stars on “Nancy Drew” and “Debris”. I’m excited to see “MAID” on Netflix, I played a recurring character that filmed in Victoria where I went to theatre school, fun to go full circle & be back doing what I love where I learned to do it.

SUNRAY: Tell us where we can find you
Erin: IG & Twitter @erinkarpluk