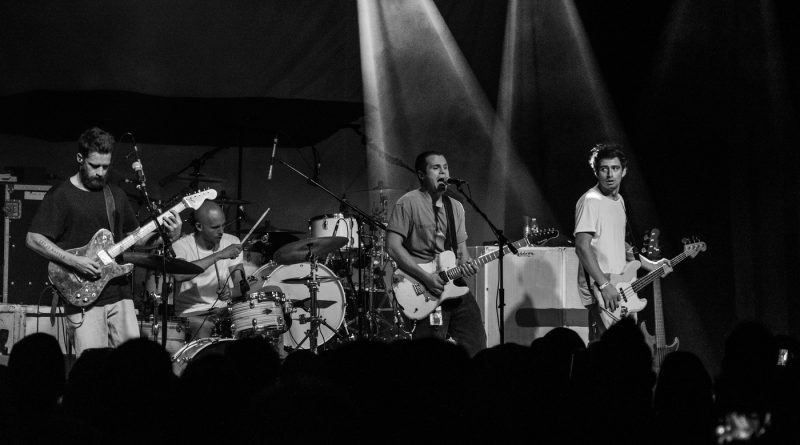 SUNRAY: How Did You Meet?
DPS: We met at Berklee College of Music.

SUNRAY: Why Dead Poet Society?
DPS: It was a drunken idea in college to name the band that. Before long it became too late to change it…

SUNRAY: Who Are Your Biggest Influences?
DPS: Different for everybody. Our shared influences are probably Muse, Queens of the Stone Age, Childish Gambino, Idles, and more recently Turnstile.

SUNRAY: How many albums?
DPS: One debut album out and several EPs before that. Currently working on album 2.

SUNRAY: Band team members
DPS: All four of us contribute to just about every part of the music and business you can imagine.

SUNRAY: What’s Your Songwriting Process?
DPS: Jack U (singer) and myself (JC guitarist) come up with most of the starting ideas. After that, everyone contributes lyrically and musically. It can be a nightmare process, but also yields some magical results!

SUNRAY: Who’s your ideal musician to collaborate with and why?
DPS: We’re not much for collaborating honestly. It’s hard enough to get the other three members to dig one of your ideas. Throwing someone else into the mix even if it’s a legend would be even more difficult I imagine.

SUNRAY: What is your favourite song to perform?
DPS: I think Lo Air is still our collective favorite. It just feels like our own, like no one else could claim the feeling from that song. And when it’s live, there is energy about it that just sticks with you.

SUNRAY: What next for The band?
DPS: Europe next month. We’ll be hitting four or five new countries most of us have never even been to. And we’re selling tickets in each one, which is just crazy. After that we’re in the studio for two months working on the sophomore album.

SUNRAY: Where we can find you?
DPS: Next month you can find us in Europe and the UK, but if you like to stay in your home then anywhere on the internet. And www.wearedps.com